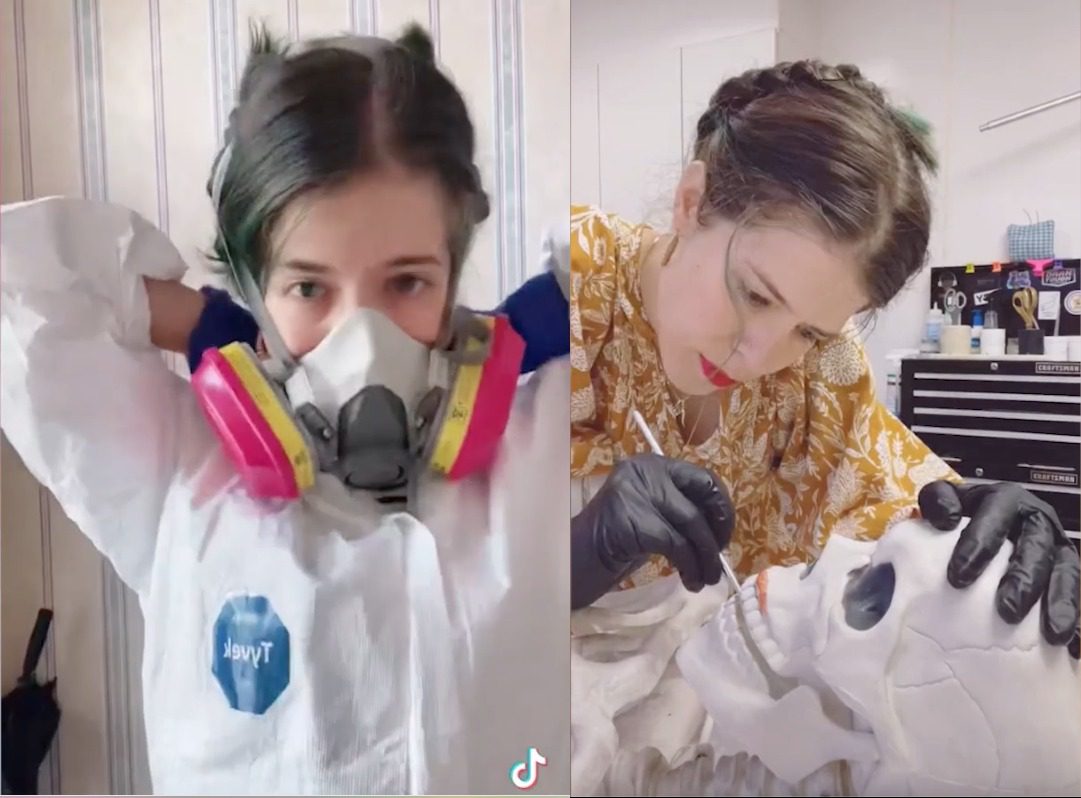 Eileen Hollis showing a day in the life of a funeral director. (SWNS)

A funeral director in her 30s has lifted the lid on what it's like working with dead people - including applying make-up and getting them dressed.

Eileen Hollis, 32, grew up among the dead in her father’s funeral home and now works there herself as a funeral director and embalmer.

Her day-to-day activities involve chemically preserving dead people before applying makeup to make the person look the same as they did in real life ahead of their funeral.

She has revealed in a series of upbeat and funny videos what it is like to suit up in protective gear, and how she puts clothes on her clients who obviously can't move.

Hollis says the job is completely different to what people think it is – and rather than being creepy and depressing, it is actually complex and can be very rewarding.

"My parents have lived in the funeral home all my life - I grew up wandering around downstairs," said theSyracuse, New York woman.

"To me this is normal but there are so many people who don't understand what it means to do my job - it's not like what you see in horror films.

"It can be a very emotional job because you want to do your best for a grieving family who have lost a loved one.

"One thing I get asked a lot is if I'm afraid of the dead, and I'm not at all - working with the dead is my job and it is an important one.

Hollis trained at a mortuary school for two years before joining her dad as a licensed funeral director and embalmer.

Embalming, where the bodies are temporarily preserved, takes around two hours and involves injecting chemicals into arteries to drain out the veins and preventing the body from decomposing by removing bad bacteria.

She then goes on to 'cosmetise' the individual - applying makeup to make them look as much as possible like their former self.

"Applying makeup to the dead is very different to applying it on a living person because the skin texture changes and the skin is not warm so it doesn't blend as easily," Hollis said.

Sometimes very little makeup is needed, but they may need a lot, to cover bruising, and Eileen adapts her technique depending on what is required.

"I'm used to it, but even now sometimes I'll be working on a person and suddenly think 'wow, what you're doing is crazy,'" she said.

"But normally I treat it like a puzzle - finding the way to make the person look most like themselves - and try to do the best job possible for the grieving family."

Despite her unusual job, Hollis said it's very rewarding and she'll never do anything different.

"My job is no different than working as a social worker, or a nurse," said Hollis, who lives with her husband Neil Hueber, 35.

"It can be depressing at times but it's important and you're there for a reason.

"A lot of people think it's scary but that's because they don't know what we do - we're not monsters!

"I'm not what you'd expect from a funeral director - I'm a sparkly colorful bubbly person and I love to do things like go roller-skating.

"I do talk about it a lot because nobody really does that - I want to educate people and show them the truth."

Watch this surfer skim the waves in a SUMO suit

Working sniff! Man nose how to make sure Nissans have that ‘new car smell’