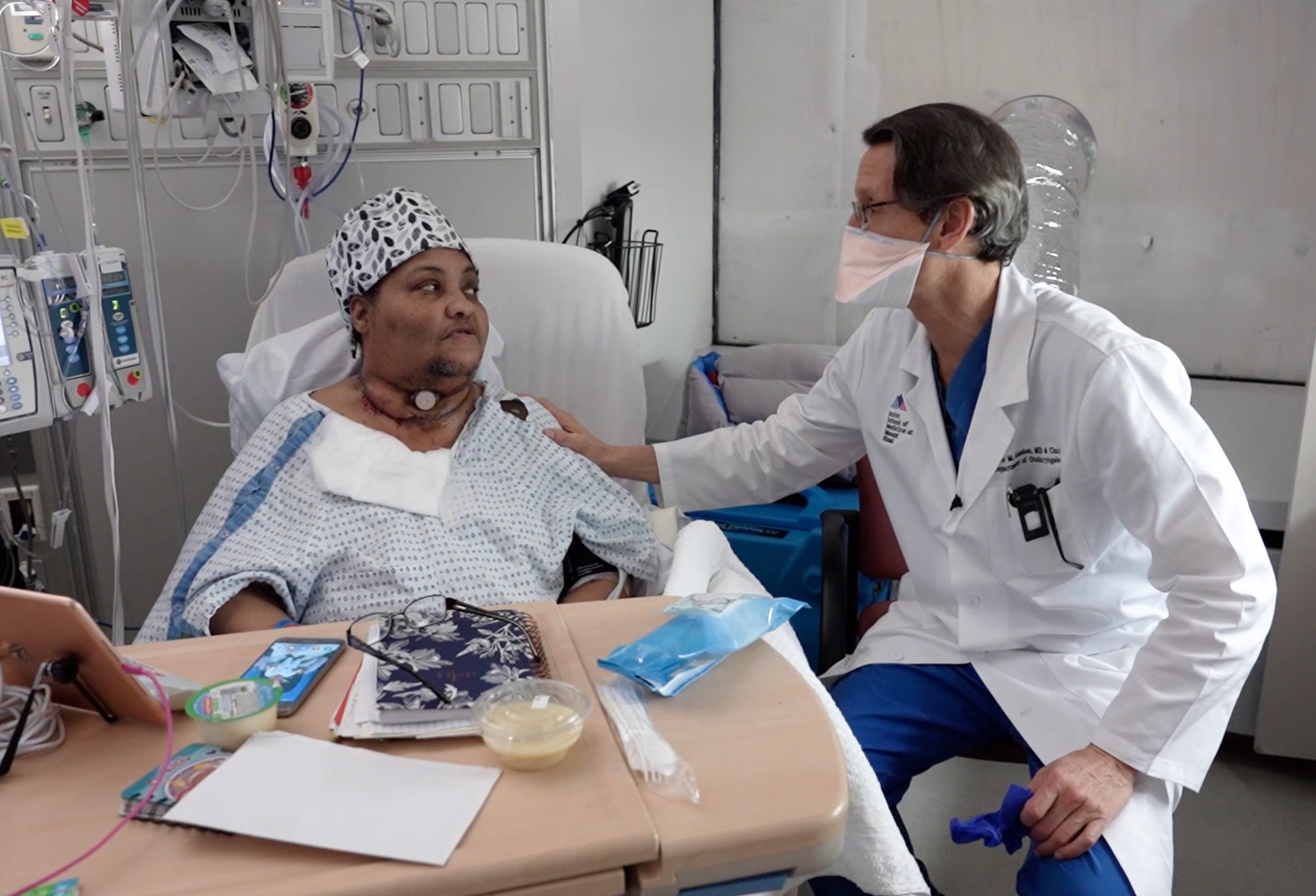 This pioneering team performed the world's first complete WINDPIPE TRANSPLANT, a groundbreaking operation that could pave the way for new treatments in severe Covid cases.

Sonia Sein, 56, had been unable to breathe through her mouth for six years following damage caused after repeated intubation for a life-threatening asthma attack.

But Sonia, a social worker, breathed in deeply for the first time after a team of surgeons, with 50 specialists assisting, successfully replaced her windpipe in an 18 hour operation.

The historic procedure was carried out at Mount Sinai hospital in New York City, on January 13, lead by head and neck surgeon Eric M. Genden.

It was the culmination of 30 years of research.

Surgeons had previously been unable to transplant the trachea, also known as a windpipe, because of the complexity of providing blood flow to the donor trachea.

The tube damaged her vocal cords and her windpipe, which is essential for speaking, breathing and normal lung function.

She underwent several failed surgical attempts to reconstruct her windpipe that only caused more damage until she was left breathing through a hole created in her neck.

Sonia decided to undergo the experimental procedure because doctors had given her just three months to live.

She said: "If I didn't have the transplant, doctors told me I had one to three months to live because I was going to suffocate myself.

"I told the doctor that all I wanted was five minutes of being able to breathe if that was all he could give me.

"It took a lot for me to go into that surgery, but I had to think about seeing my granddaughter and being able to breathe."

The surgical team removed the trachea and the associated blood vessels from the donor, then reconstructed the trachea in Sonia from the lungs to the larynx.

Surgeons used a portion of the esophagus and thyroid gland to help provide blood supply.

"I'm able to dance with my grandkids for the first time in six years. That's the best thing."

Dr Genden said: "For years, the medical and scientific consensus has been that trachea transplantation could not be done because the organ's complexity made revascularization impossible, and every previous attempt to perform in-human transplantation ended in failure.

"This surgical achievement is not only the culmination of 30 years of research that began when I was a medical student at Mount Sinai, but was also made possible by the spirit of collaboration that exists at Mount Sinai."

Dr Genden added that the transplant offered fresh hope to patients who had sustained tracheal damage during treatment for COVID-19.

He added: "It is particularly timely given the growing number of patients with extensive tracheal issues due to COVID-19 intubation.

"Because of both mechanical ventilation and the nature of the COVID-19-induced airway disease, tracheal airway disease is precipitously increasing, and now we have a treatment."