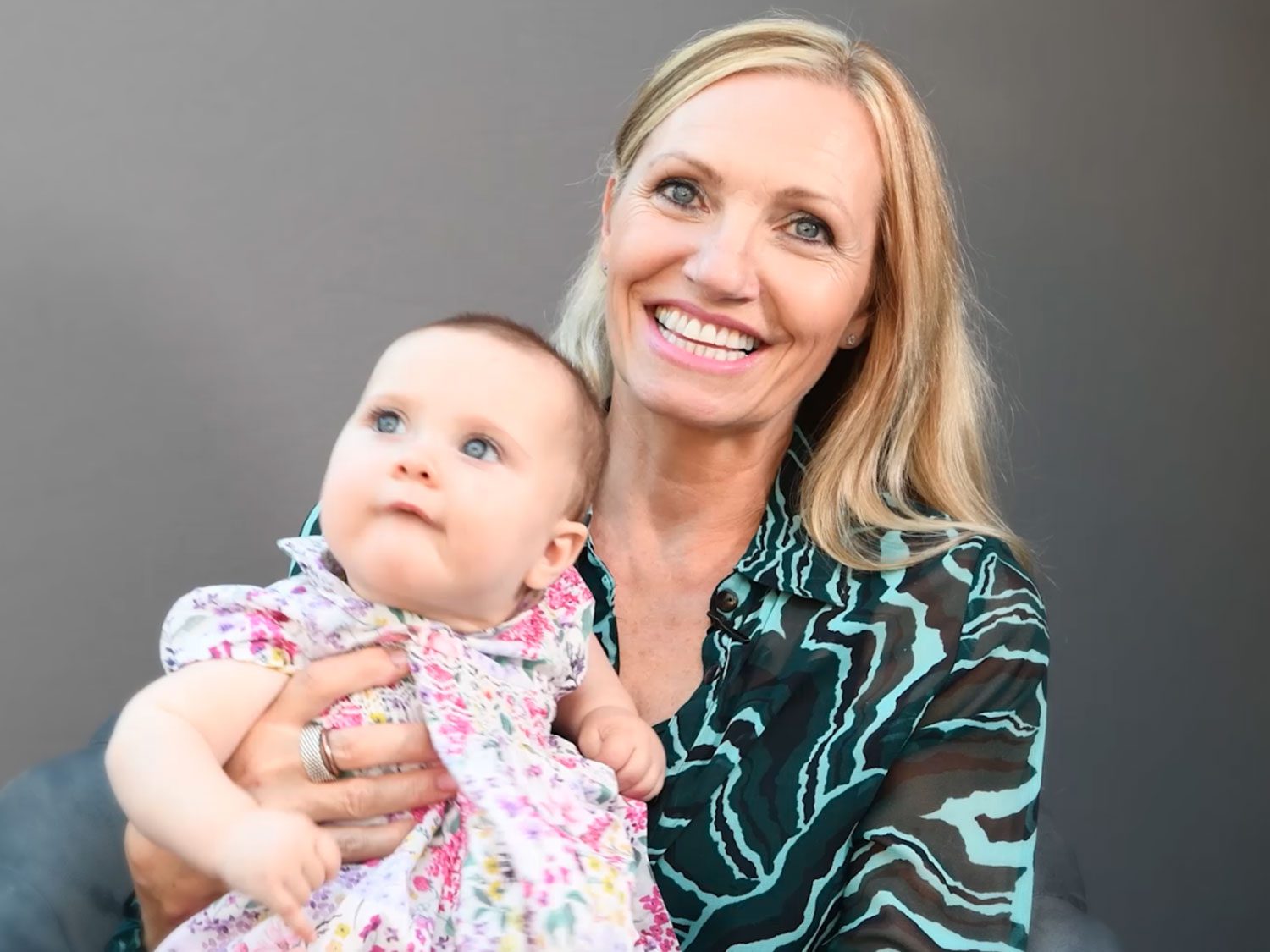 By Lucy Bryant via SWNS

A woman determined to become a mom despite being single and in her 50s had her dreams come true – after welcoming a little girl via IVF.

Kelly Clarke, 51, was known amongst friends for being ‘great with kids’ and always wanted to be a mom but had been unlucky in love.

As she approached her 50th birthday, Kelly knew 'time was not on her side' and made the decision to fly to Athens, Greece, in March 2020 for an IVF consultation on recommendation from a friend.

“I managed to become a mother against all odds," said Kelly,a former North Terminal manager for Gatwick Airport, from Crawley, West Sussex.

“Anyone who knows me will tell you how much I’ve always wanted to be a mum."

She claims she was met with a ‘huge amount of resistance’ from family at the thought of being an older mother and using a sperm donor to welcome a child – but knew that being a mom was what she wanted.

In July 2020, Kelly flew back to Athens for the fertilized embryo to be implanted, before taking a pregnancy test 12 days later to find out the IVF had been successful and she was pregnant.

“I still can’t quite believe it and am constantly overwhelmed with the joy of finally being a mum at 51," Kelly said.

"She’s the perfect baby- I couldn’t ask for anything more.”

With help for the first two weeks from her mom, Barbara, 74 and sister, Jenny, 48, Kelly and Lyla are now taking on life just the two of them. Despite the challenges of being a single parent, she says she is ‘constantly overwhelmed with the joy of finally being a mum.'

Having just celebrated her 51st birthday – and her first as a mother – Kelly said it was the ‘best birthday ever’ with the addition of her pride and joy, Lyla.

After a busy career, as cabin crew for both Virgin Atlantic and British Airways, followed by high profile roles at Gatwick Airport, Kelly was happy in her work but had never had much luck in her relationships.

Despite knowing she’d always wanted to have a family, she’d never met the right person to have a baby with, so decided to go it alone.

“A friend of a friend had been to Athens for IVF and said it had been the best experience and that I should do it too,” Kelly said.

“I just came to the point where I thought: 'If I don’t do this now, I’m going to miss my chance.'”

Kelly made contact with IVF Serum, a fertility clinic in Athens, who arranged an initial video call before inviting her to the clinic in March 2020.

“I did it all by myself, I didn’t tell anyone I was going,” Kelly said.

“The team there looked after me so well, I felt like I was the only person they were dealing with.”

The fertility team discussed her needs and told Kelly she would need to be three months pregnant by the time she turned 50 on October 22, 2020, and that she would need to use a donor in order to become a parent.

Kelly returned to the UK with the medication required to kickstart the IVF process, and after a delay to the process caused by the COVID pandemic, flew back out to Athens in July 2020.

During a three-day trip to Greece, Kelly was implanted with the fertilized embryos before flying back home and heading straight back to work.

“It was so weird thinking about what I’d just done,” Kelly said.

“I fit my trips into my days off at work, so nobody knew what I was doing – but I kept thinking how crazy it was that I could be pregnant.

"My sister knew as she dropped me to the airport, and my parents knew I was thinking about it, but I largely did it all on my own."

Just 12 days after the procedure Kelly took a pregnancy test which revealed it had been a success and she was pregnant.

“I’d been met with a huge amount of resistance from family for deciding to become a single mum at 50, because they were worried about me and the implications of using a donor – but in that moment I knew I’d made the right decision,” Kelly said.

“I adored being an auntie to my nieces and my friends' children, but now I wasn’t just going to be an aunt, I was going to be a mum.”

Kelly's parents - who are now loving time with their granddaughter - were initially 'desperate to stop' Kelly from going ahead with IVF.

According to Kelly, they were sure she would lose her job, struggle financially, and worried about her health and wellbeing.

"They were so against me doing it, which was very hard - I felt like I was being disowned. But I can see now it's because they love me so much," Kelly said.

"They worried about how I would cope if it wasn't successful, because they knew how much I wanted to be a mum - but it never even crossed my mind that it wouldn't work, I just had a feeling.

"Now that Lyla's here they are incredibly supportive and couldn't be better grandparents. I don't know what I'd do without them."

Despite some bad migraines at the beginning of the pregnancy, the rest went smoothly, and Kelly was booked in for a caesarean section at Princess Royal Hospital on March 31, 2021.

Her daughter Lyla Rae arrived at 5.26 P.M. weighing 7lbs 8oz. After a two day stay in hospital for checks, Kelly was able to take her little girl home.

“My mum stayed me with a week followed by my sister while I recovered from the c-section – but then it was just the two of us,” Kelly said.

“I won’t lie and say it’s easy being a single parent, I knew it wasn’t going to be. But Lyla is an absolute angel and has been a dream, I’m incredibly lucky.”

Kelly signed an agreement with the fertility clinic agreeing she would tell her daughter the truth about her conception – something she agrees is important for Lyla to know.

“I’ll be completely honest with Lyla from the moment she can talk,” Kelly said.

“They suggest explaining the donors as ‘angel donors’ or ‘angel father’ - to give some sort of presence to how she came into the world.

“One thing’s for sure, Lyla is going to know she is loved and how much I wanted her – she'll know the lengths I went to bring her into my world.”