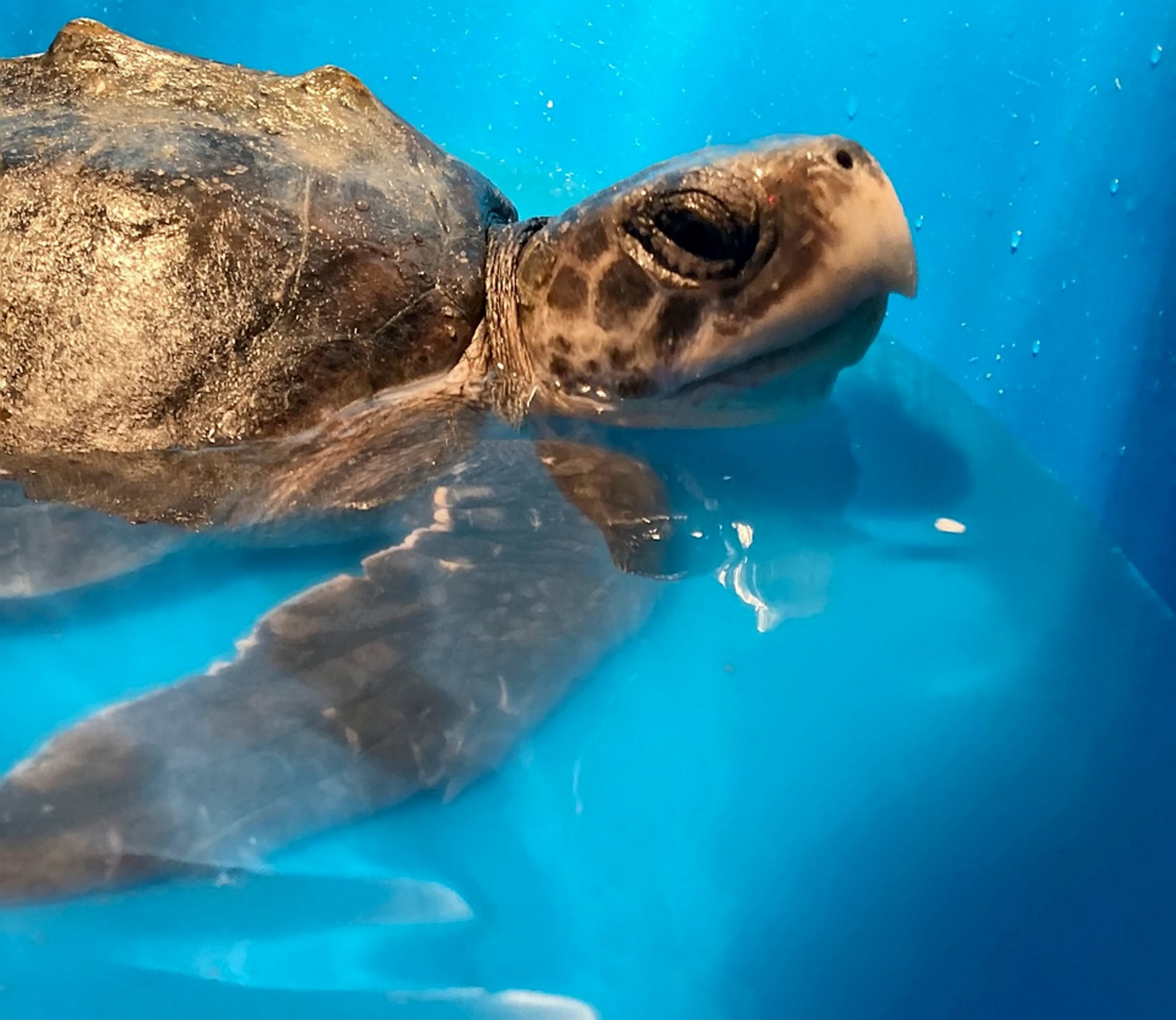 The world's rarest species of sea turtle found washed up on a Welsh beach is expected to make a full recovery after rescuers put it in a specially adapted BATH and an igloo made from loft insulation.

The Kemp's Ridley sea turtle was found in a state of cold-water shock on Talacre beach in north Wales - 5,200 miles away from its home in the Gulf of Mexico.

Dad Ash James, 34, was taking his dog Teddy for a walk with his son Gethin, nine, when he made the remarkable discovery on November 28.

Also known as the Atlantic ridley sea turtle, it is the rarest and the most endangered species of sea turtle in the world.

Incredibly, the sea creature was still alive despite spending time in the chilly 8oC British waters rather than its usual tropical climate of 25-30oC.

It was transferred to the Anglesey Sea Zoo for specialist intensive care where keepers began by putting a moist towel over its head.

The turtle - nicknamed Tally after the beach it was found on - was then transferred to a specialist bath with was slowly filled with water as its body temperature increased.

Tally is still too young to be easily determined as a male or female.

The aquarium has now revealed that that Tally is starting to "show positive signs of recovery and activity" and has come out of the critical care stage of recuperation.

It is hoped Tally will spend the next few months recovering before being flown back into its natural habitat in the ocean basin between North and South America.

Frankie Hobro, director and owner of Anglesey Sea Zoo, said: "We started by just keeping a moist towel over Tally as it couldn't lift its head to start with but we have been able to slowly introduce water.

"We have built Tally a special igloo as well which is covered in loft insulation to help bring the body temperature back up inside the adapted incubator.

"Tally is showing bursts of activity and continues to make good progress so we are hopeful we can eventually get it back home.

“We are extremely grateful for the amount of public support we have had since announcing Tally’s arrival and we would like to thank everyone for the well wishes and encouragement we are receiving.

"We are very pleased with Tally’s progress so far and we are now becoming hopeful if this continues that Tally may make a full recovery so that he or she can be flown back to Mexico and released in warmer waters and back in the wild where it belongs."

A spokesperson for Anglesey Sea Zoo added: "We are seeing many positive signs of improvement.

"We are becoming cautiously hopeful that Tally may rally considerably in the next few days and be well on the road to recovery, which is a huge relief.

"The results of the initial blood samples are reassuring, as there do not appear to be any underlying conditions of concern as a result of Tally’s cold-stranding, beyond dehydration and those caused by general inactivity and muscle weakness.

"All of which were to be expected from the turtle having suffered the ordeal of cold-shock and stranding."

Celyn Thorpe, the vet treating Tally, said: "Our first treatment aims are to give broad spectrum antibiotics, to protect this debilitated patient against any bacterial infections.

"Tally’s condition means that the immune system is weakened and less able to protect him or her from disease.

"We are also giving rehydration therapy and some vitamin injections to support Tally until he or she is at a temperature where we’re able to feed them conventionally.”

It is believed Tally got lost after it was pushed way off course by Atlantic storms during Storm Arwen which affected the jetstream.

The wayward sea creature was found after the family's border collie started "making a fuss" over what Ash thought was a pile of seaweed.

His wife Samantha, 35, of Holywell, Flintshire, reported the find to the British Marine Life Rescue and specialists found it alive.

She said previously: "Ash thought it was dead as it was motionless.

"He video called me and at first I thought he was joking. It wasn’t till he showed me that I believed him.

"We were both in shock as they are not supposed to be in these parts of the world.

“It was Teddy who found it, she wouldn’t leave it alone.

"She just kept barking and sniffing around the poor thing. We think she knew it was still alive.

“It was astonishing to find such an amazing creature on our local beach."

Kemps Ridley's are the world’s smallest and most critically endangered, protected under the Convention on International Trade in Endangered Species (CITES).

They have just two known breeding sites remaining for the species globally, both in the western Gulf of Mexico and were close to extinction in the 1980s.

They feed on a wide variety including crustaceans and seaweed and can live for up to 50 years. An estimated 7,000 to 9,000 remain in the wild.

Lions and tigers and the ‘biggest bear they’ve ever seen’ … oh my!