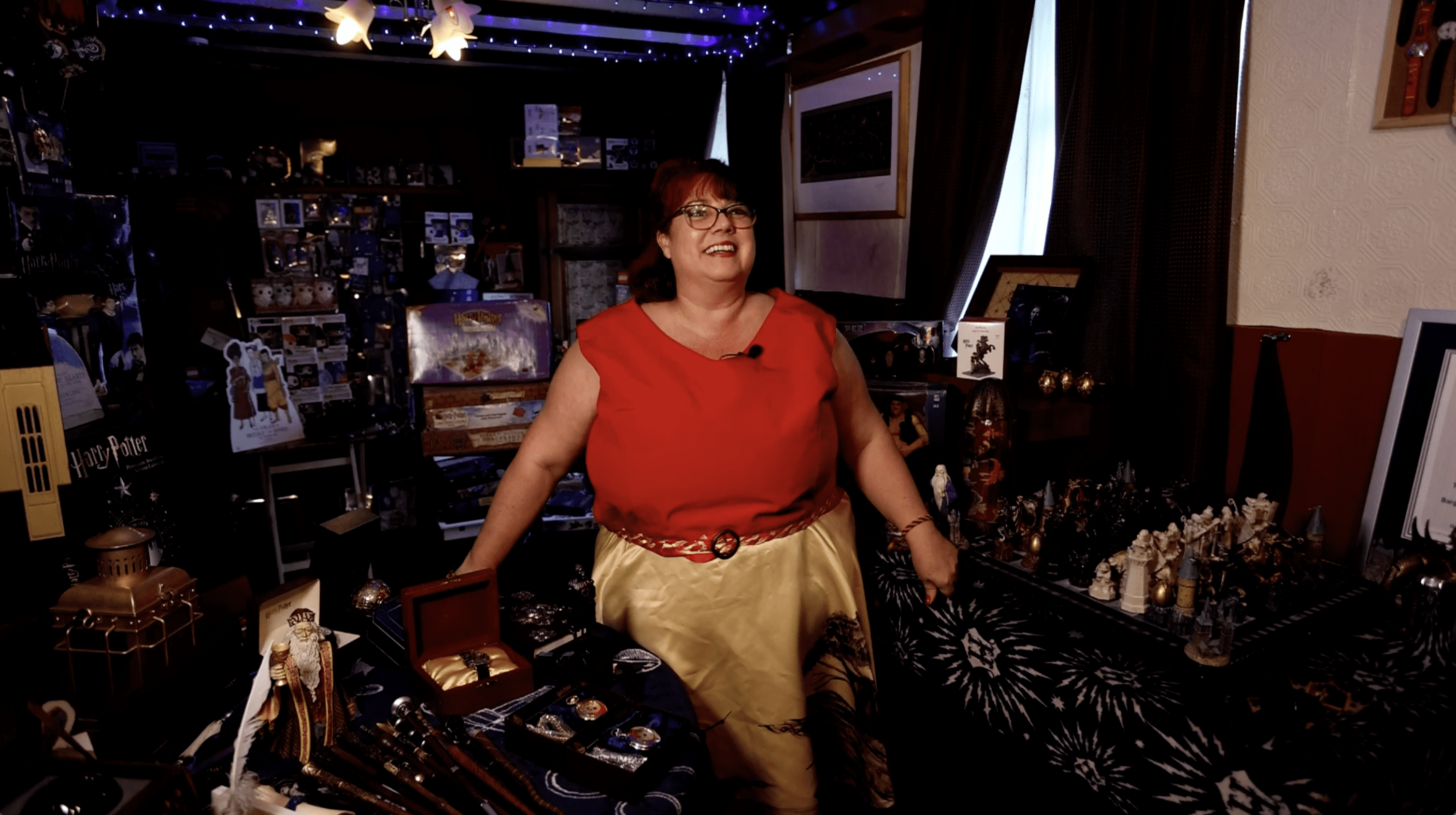 Screenshot of Tracey Nicol-Lewis and her collection. (SWNS)

By Fiona Jackson via SWNS

Meet the woman who has the world's largest collection of Harry Potter memorabilia - and even had a Wizarding World-themed wedding.

"I think 'oh that's it I won't get any more', and I go to the shop and something always falls in my basket!." said Tracey, from Mid Glamorgan, Wales.

"I love looking and rearranging my collection - it’s my happy place.

"Harry Potter is a magical world that you can use to escape into, and that is what I did."

She first watched the movie version of "Harry Potter and the Philosopher's Stone" in 2002 just after the birth of her son and fell in love straight away.

"Because I had my son in 2002, and them having the baby in the film and all the magic, it was like having it alongside me," she said.

It wasn't long before she acquired her first Harry Potter collectible - a chocolate frog from her local corner shop.

Since then her collection has grown until it took over a full three rooms of her house.

Tracey loves the franchise so much she even had a Harry Potter-themed wedding last year when she married husband Martin, 45.

She wore a wedding dress in the Gryffindor red and gold, adorned with the iconic Deathly Hallows symbols.

Her bouquet was made from the torn up pages of a damaged edition of the Goblet of Fire, and shoes painted with Dobby the elf.

Her friends even attended dressed in the robes of their Hogwarts House.

She credits JK Rowling's world with helping her cope with the death of her first husband Simon Nicol-Lewis, who passed away in 2005.

He'd pre-ordered "Harry Potter and the Goblet of Fire" for her - and it arrived weeks after he died.

"Harry Potter got me through a really tough time because when I started collecting the last present I had off my first husband was a book of Harry Potter before he passed away," she said.

"That's why I think the collection got so mad."

Little by little, the odd eBay bid and trades with friends grew her collection, and Tracey hit her first 100 items in about 2006.

Her hoard now includes special editions of the books and their spin offs, and at least 127 action figures

Her largest item is her cardboard book display for "Harry Potter and the Cursed Child" which stands at five feet tall.

She's never had her collection valued but she estimates she spends on average £100 ( $132) every month on new items.

"Everything I like in my collection is just amazing, I love it," the mom-of-one said.

"They have memories attached to them as well because I can remember the bits from the films or the books."

Tracey also enjoys Harry Potter cosplay, and attends events to meet other fanatics while dressed in her clobber.

She says that her favorite items change over time, but her currents are her collection of 47 wands.

But when she met her now-husband Martin, he wasn't immediately taken by her hobby.

"He knew about my collection so it was accept it or run!," she said.

"First of all I said I like Harry Potter and I collect Harry Potter, and he was kind of shocked when he came around and saw the collection.

"But in my last house he decorated it red and yellow because of Gryffindor and he put up shelves for me and made it more Harry Potter.

"Martin is amazing, he puts up with my collection and even buys me things for it."

The family moved to a larger property in 2019 to accommodate the collection, and now have three rooms dedicated to it.

"We need a lot of work doing on the house so I can't have any more at the moment - but I'm working on it!

"I've had people say they want me to open the house and start a B and B!"

Tracey and Martin married after four years together on February 2. 2020 in a lavish Potter-themed ceremony in Discovery Cove in Orlando, Florida.

The wedding cake was topped with a golden snitch and magic wand, as well as the words 'Martin found a keeper', referring to the Quidditch position.

Her Gryffindor-inspired wedding dress and shoes were made for her by her friends in the Harry Potter community.

"I wanted a dress I could have for my wedding but could wear to other occasions," Tracey said.

"Martin let me pick what I wanted so the tunes going in and when you came out were Harry Potter.

"My friends in Florida were there in robes."

While security guard Martin doesn't share her passion for the Wizarding World, it was his idea to count her collection for Guinness World Records.

Together they took a picture of every single item in her collection, and also had to video the counting process - which took at least five hours.

She had a whopping 5,284 items when it was measured by Guinness World Records in April.

But since then, the 'Potterhead' says she's acquired at least 1,000 more.

"I still can't believe that I have much in my collection," said the housewife.

"When it's all around your room and you see it every day, it's only when someone comes in and sees it and they're like 'oh that's a lot!'

"I'm looking for the bits I want to complete from missing sets, but then other things seem to pop out and I buy them instead."

In April this year, she received the happy news that she had not one, but two records - as she had both the world's largest Harry Potter and Wizarding World collections.

The Wizarding World encompasses the "Fantastic Beasts" spin-off movie series along with the Potter universe.

She broke the previous record, also held by a Welsh superfan, by 2,187 items.

"I didn’t think I had enough," she admitted.

"I was over the moon, I couldn’t believe I had two Guinness World Records."

Her dream is to one day meet author JK Rowling in person and thank her for how her series changed her life.