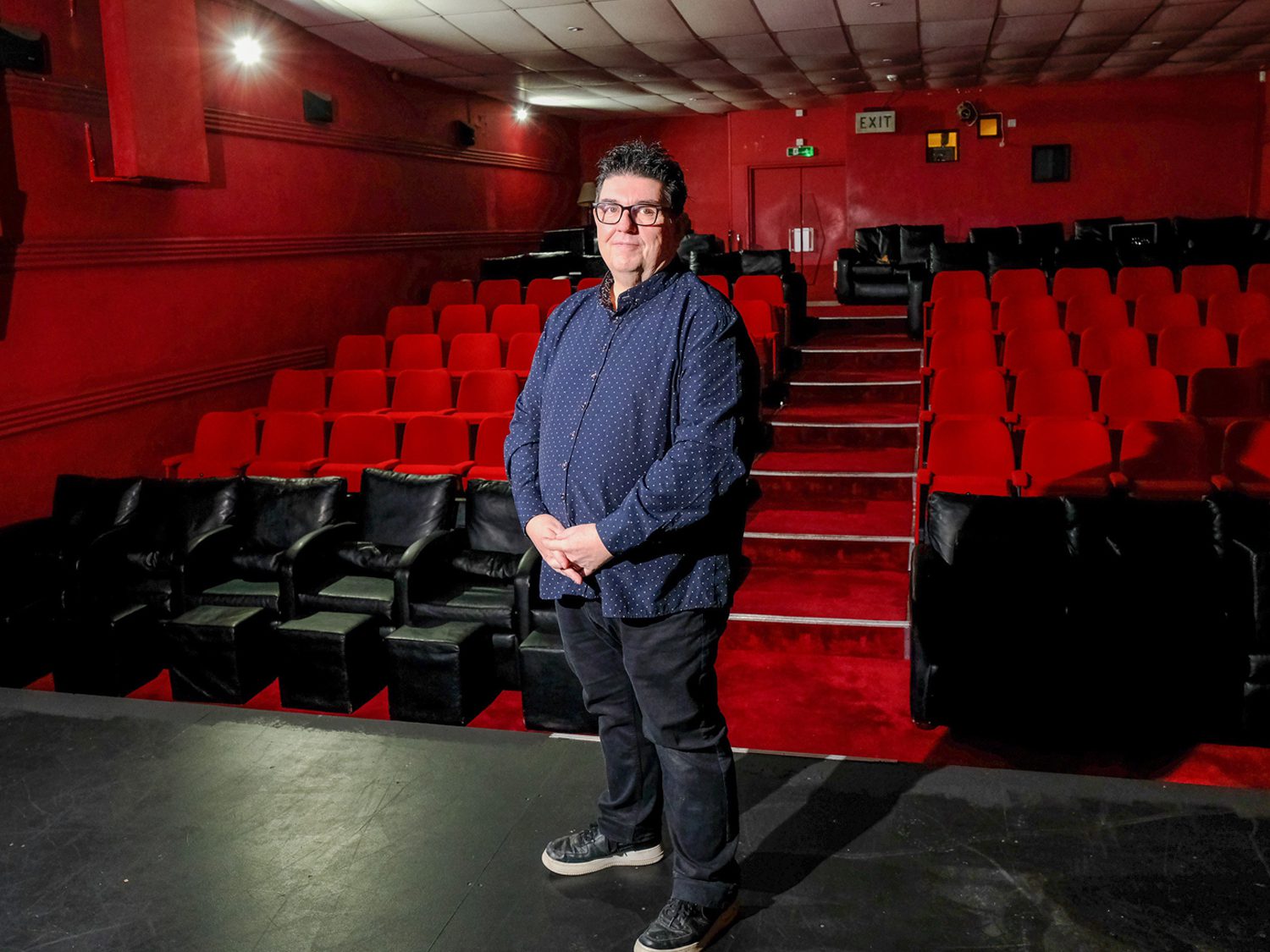 Kevin Markwick, 59, runs the newly reopened 'The Electric Cinema' which was first opened in 1909. (SWNS)

Fascinating photographs show inside Britain's oldest working cinema which has reopened today (Fri) after it was saved from closing for good after 112 years.

The Electric Cinema in Birmingham has been entertaining film fans for over a century after it was built out of a converted taxi rank back in 1909.

But its future was thrown into doubt after the pandemic forced its closure almost two years ago prompting fears it would never reopen again.

Businessman Kevin Markwick, 59, stepped in to save the historic art-deco picture house which has reopened for the first time since March 2020.

Is it estimated around £100,000 has been spent restoring the two-screen cinema - which show 35mm films as well as digital - back to its former glory.

Dad-of-four Kevin, who also runs the The Uckfield Picture House in Sussex, said: "I’m a bit nervous but excited to see people’s reaction to it.

"I really can't wait to see wonderous look on everyone's faces when they get back and there's nothing like listening to an audience enjoying a film.

"We have a successful cinema in Sussex that we’ve had since the 1960’s and we felt now was the time to spread our wings.

"The previous owner approached me and told me it was for sale so I thought I’d have a look because this place is a piece of British cinema history.

"It has survived pretty much the entirety of the film industry, which in itself is an incredible achievement.

"It is certainly a project and will be an adventure but given our experience with heritage cinema, it is one we should be able to complete.

"Most of the refurbishments are on the technical side. It’s a long-term project, because it had been closed for so long we had to do the basics.

"It wasn’t happy being shut for a year because of the pandemic. We had to replace the projection equipment and that took a while to sort.

"The projection equipment doesn’t like being turned off. We will be working on improving everything properly, but it will take a few years and many hundreds of thousands of pounds.

"The seats for example are £300 for a single-seat, so when you see us getting angry that you’re putting you feet up on them, please understand why.

"The response has been overwhelming already. My village in Sussex has 15,000 people, Birmingham has 1.2 million so the amount of interest has been a bit of a shock.

"It’s a historic building and people are excited about it opening again."

The Electric opened on December 27, 1909 showing silent films with a piano backing.

Over the years the cinema has been through several incarnations including showing adult movies during the 1970s before it moved to mainstream and art house films.

It has also been named Select Cinema, Tatler News Theatre, The Jacey and The Classic and The Tivoli before becoming The Electric again in 1993.

The building was saved in 2004 by entrepreneur Tom Lawes who turned it into a thriving business for more than a decade.

The cinema still retains many original features, including an old ticket machine, film projectors and its art-deco frontage.

New owner Kevin believes film-lovers will keep flocking to The Electric following the pandemic as people return to a more normal way of life.

His daughter, Katie Markwick, 32, will become manager and the cinema will employ 13 people.

Kevin added: "We hope that we can let it grow and expand. We're just breathing new life into it. We want to make this the go-to place for film lovers in Birmingham

"We really want to promote the cinema experience for younger audiences so they understand what they're missing as streaming and watching films on TV isn't the same.

"You can sit at home watching Netflix, but you can't beat sitting with an audience and enjoying stories collectively.

"It’s a funny old building. It’s had an odd life, it was a news theatre, a cartoon theatre and even an adult entertainment theatre at one point.

"We can do a films for everyone. We want to be showing a variety really, new releases, art house, everything. We’re also showing films in 35mm.

"We’ll be even showcasing a Russian Ballet at some point. We’ve sold out a few different shows now so hopefully that continues."

New study unravels the ‘meat made us smarter’ theory

Bingers beware! Too much TV can cause this health issue