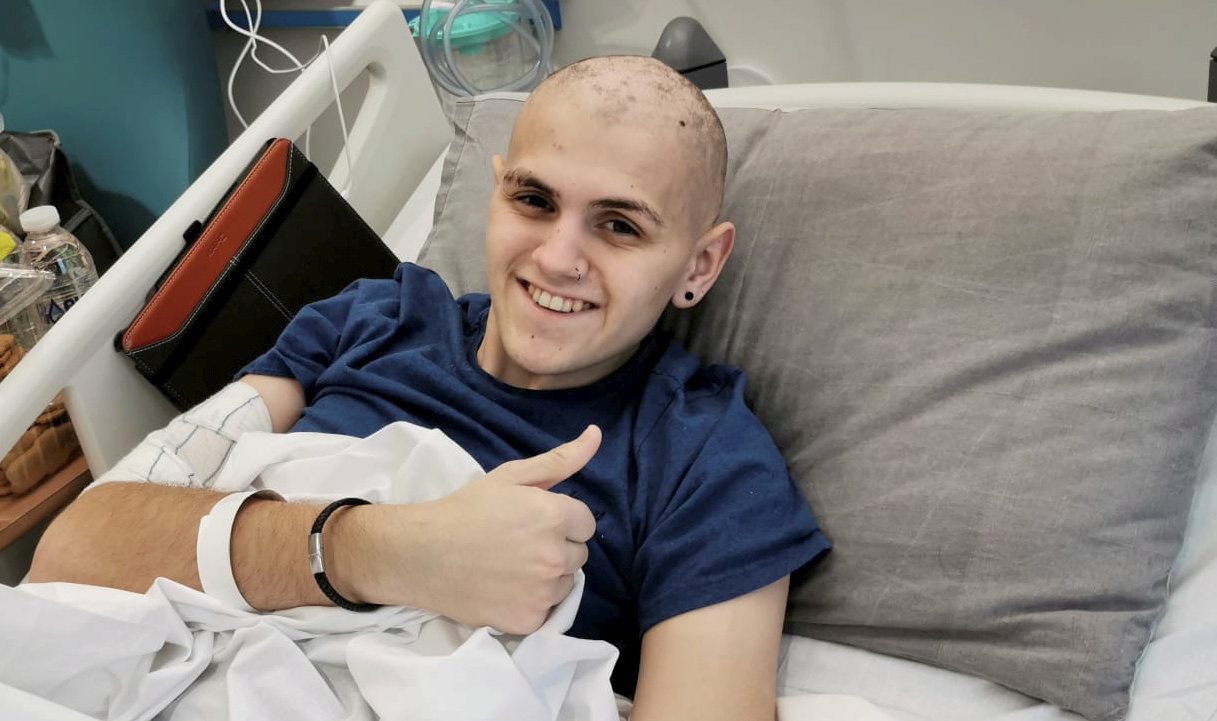 By Harrison Moore via SWNS

A dying teen has given $1,300 of his savings to a six-year-old fellow-cancer sufferer whom he's never met - and has now also raised a further $60,000 for him.

Rhys Langford is severely ill with osteosarcoma, a cancer which starts in the bones, but over time has spread to several other areas of his body.

The 19-year-old read the story of Jacob Jones, a six-year-old boy from the same town.

Jacob had gone through grueling treatment to rid him of a rare cancer called neuroblastoma but doctors believe it has now returned.

Rhys, who worked as a laborer for a water supplier before falling ill, then immediately decided to donate his savings for Jacob's treatment.

Not only that, he has also set up an online crowd funder which has since gone viral and raised more than $47,000 for Jacob and his family.

Rhys's mum Catherine Langford, 38, said: "Rhys found the story of little Jacob online and he called me upstairs to show me.

"He said I want to donate some money to him it would be incredible if someone would save him.

"I couldn't believe he was thinking about someone else when he's on death's door himself.

"Although our hearts are breaking because our son is dying, at the same time they are bursting with pride."

Rhys, whose cancer has left him bedridden, was a talented athlete before his illness.

When he was 16 he became one of the youngest people in the UK to achieve a black belt in the martial art, Krav Maga, at adult grading.

He's also scaled Snowdon three times and had dreamed of one day going up Ben Nevis.

The first sign of a health problem came when Rhys had a sprint race with friends, lost his balance and fell.

Catherine and his dad Paul Langford, 45, thought he had a groin strain, but Rhys was still limping eight weeks later.

He carried on working but reached a point where he was struggling to get out of the lorry.

In October 2020, after various tests, Rhys was tragically diagnosed with osteosarcoma.

Paul said: "Your world breaks down when you hear that word 'cancer.'

"I can remember Rhys saying, 'Dad it's only cancer, I'll be alright Dad, I'll be fine,' he has been so brave throughout everything.

"Consultants initially told us the survival rate was about 50/50.

"We knew he would be severely disabled but we always thought he would beat it."

"When the severity of the illness dawned upon Rhys he started to question what he'd done wrong in life and why this was happening to him.

"He suddenly realized he'd never kick a ball again, or drive a car and that hit him pretty hard."

Rhys had a series of blood transfusions and went through intensive chemotherapy, quickly dropping from 168 pounds to just 116 pounds.

After the 10 weeks of chemo Rhys stayed in the Royal Orthopaedic for three weeks for an operation to remove all the bone from his kneecap to his right hip.

This would mean Rhys would always need two sticks to walk, but the family hoped it would save his life.

Up until August 2021, Rhys then underwent another 20 weeks of chemo, which they initially thought had cured his cancer and he started to get his life back.

But in October, a year after his diagnosis, Rhys' right leg started to swell growing to three times its normal size.

He spent almost a month in various hospitals being treated for sepsis in the run-up to Christmas until tragically experts found a cancerous mass in his thigh.

Although consultants in Birmingham discussed the possibility of a full amputation of the leg, they told the family on January 4 that Rhys could not be saved

Paul said: "There were three different surgeons waiting for us.

"They said we need to be blunt with you.

"The cancer has returned and it's not only in his thigh. It's in his groin, his back, his lymphatic system, his lungs.

"There's nothing more we can do to save his life.

"As a parent, if someone gives you a one percent chance of life you thrive on it - but there was nothing they could do."

"At first Rhys was angry, looking for someone to blame.

"He was saying, 'They told me they'd saved me, they lied to me.'

"He went through a dark stage, thinking there was nobody waiting on the other side for him."

The Langford family had never been religious but they found the only source of comfort for Rhys was visits from Reverend Roy Watson, chaplain at the Hospice of the Valleys.

Paul added: "He didn't see any point in counseling but he seems to find faith when the reverend comes to the house.

"The reverend will read passages from the Bible about healing and the afterlife at his bedside and he'll be engrossed."

Since starting the fundraiser for Jacob the money he's raised has been going up at lightning speed and is currently totaling at over £44,000 (almost $60,000 USD).

Paul said: "Rhys has always been a very caring and selfless boy, always thinking of others.

"After the absolute hell he's been through, to do this for a little boy — words can't describe how proud we are of him."

"We also want to pay tribute to the efforts of surgeon Scott Evans and all the staff at the Royal Orthopaedic.

"They said the chances were that we could save Rhys' life but things change and I can't blame anyone.

"I've never met a surgeon in my life so enthusiastic about his job and so caring as Scott Evans - he was truly amazing.

"Ten years ago they didn't have the technology to even attempt Rhys's surgery so it's incredible how things are progressing."

Alywn said: "Here is a young man who has not long to live and yet he read Jacob's story and wanted to help him.

"He has said that he cannot be saved so he wanted to help save Jacob.

"Our hearts go out to his family in this really difficult sad time."

You can donate to Rhys's fundraiser for Jacob's here.