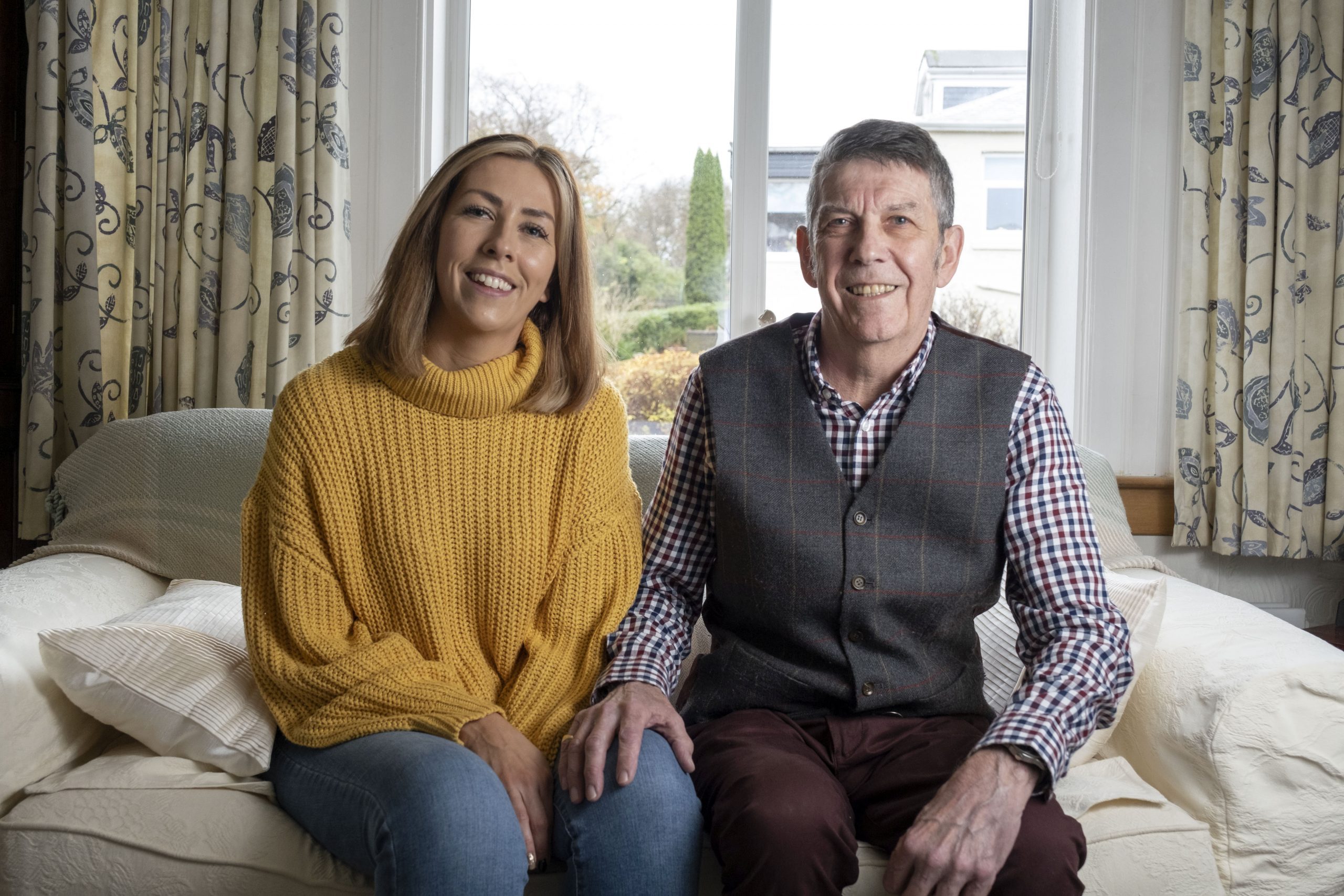 Brian Thomson and his daughter Pamela. ( Chris James via SWNS)

By Sarah Ward and Lauren Brownlie via SWNS

A dad who was found to have only one kidney was saved by his daughter donating one of hers.

Dad-of-two Brian Thomson, 71, was rushed to hospital in the summer of 2010 after collapsing at a wedding, where stunned doctors found he had only one kidney.

His kidney function had dropped to only seven percent due to a problem with his prostate.

In February 2011, he was told he needed a transplant, and a year later daughter Pamela donated a kidney to give Brian the best chance of being in good health.

Grandad-of-three Brian is healthy and loving his babysitting responsibilities a decade after the lifesaving op.

Mom-of-two Pamela Paterson, who works as a teacher, said having donated an organ has made no difference to her quality of life.

Brian said: “I was a very healthy person, so this all came as a total surprise.

"After I collapsed, I was rushed to hospital in an ambulance where doctors discovered I had an enlarged prostate.

“They were confident they would be able to sort it out no problem, but when I wasn’t recovering as well as hoped, a scan showed that I’d been born with just one kidney.

"I never had any idea, and it just shows how well you can survive with only one.”

When a transplant was discussed, Brian’s daughter Pamela and wife Margaret put themselves forward for testing to see if they would be a potential match, with Pamela being the closest.

Brian, from Bearsden, East Dunbartonshire, Scotland added: “I’m so fortunate not to have to go on the waiting list, and so only a year after being told I needed a transplant in February 2011, Pamela was able to donate me hers in February 2012.

"It was actually just before my birthday, so that was the nicest birthday present I’ve ever had.

“The hardest part of the whole experience was when I had to watch Pamela get wheeled away for the surgery and I thought to myself ‘oh my she’s really doing this for me.'

"We were told by the surgeons that they were caught by surprise at how quickly the kidney started working.

“Since the transplant, I've been absolutely fine – I have to go for regular check-ups but I’m in and out so quickly as everything comes back perfect straight away."

Brian is now a doting grandfather to three grandsons, with Pamela unexpectedly welcoming her first son within a year of donating her kidney.

After his transplant, he decided to retire and then became babysitter to the three boys.

He said: “I’m so glad to get to spend so much time with them as their Papa.”

Brian has spoken out about his experience as he backed a new campaign to raise awareness of the benefits of living kidney donation.

There are two routes to living kidney donation – directed donation where a friend, relative or partner donates to a loved one, or non-directed altruistic donation, which involves a person donating to a stranger.

Pamela, who was just married and thinking of starting a family at the time of her dad’s ill health, made him the priority.

She said: “We have a small family, and my sister was a new mum and obviously my mum that bit older, we decided I’d put myself forward first.

“We had seven months of testing, and I had a bit of a wobble as there was the pull of wanting to start a family, but I was told I shouldn’t for a year after the surgery.

"Then Dad collapsed again at Christmas, and the medical team said we needed to do this in six weeks as they were unsure how well he’d respond to dialysis.

“I’d taken that time to get fit, I stopped drinking, and I thought ‘if I’m going to do this, I’m going to give you the best kidney I possibly can.’

"We were so lucky, we were told they couldn’t have had a more perfect match.

"To this day, my kidney function has never dipped and his is the same as mine.

“I accidentally found out I was pregnant six weeks later, and I was initially put under consultant care, but was dismissed instantly as my kidney function was totally normal.

"I’ve now got two kids, and the donated kidney is not a feature in my life, which I really thought it would be.”

How parents have kept the spark alive during the pandemic