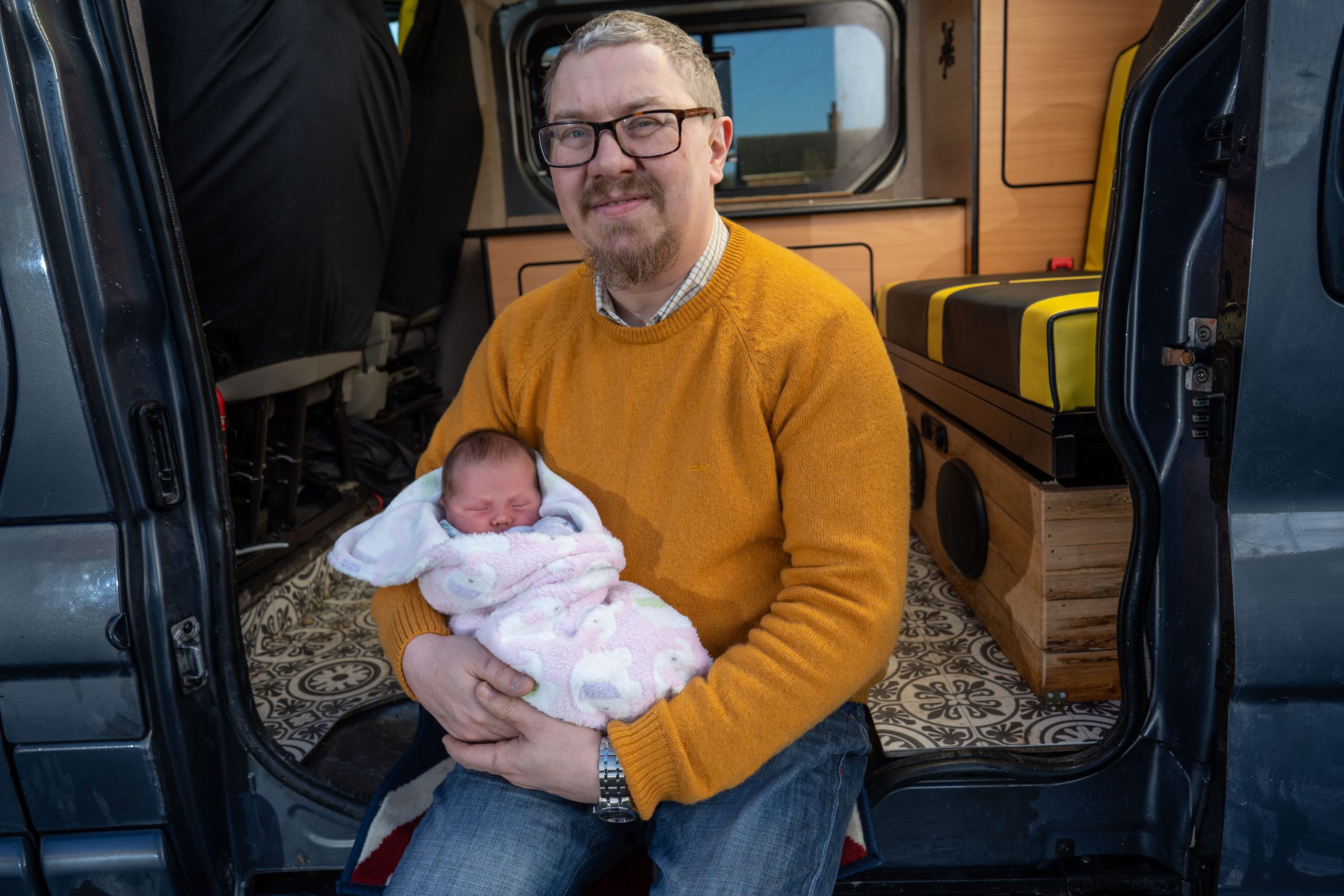 A hero dad had to deliver his own child for a second time when his wife went into labor in their campervan - three years after helping her give birth at home.

Dominic Lister, 44, leapt into action after being forced to pull over on the way to hospital because of roadworks while partner Natalie, 37, was having contractions.

The funeral director then calmly helped deliver his daughter Alice, who was born weighing 7 lb 11 oz, in the middle of the A60 near Nottingham, England on February 7.

Amazingly, Dominic had done the same when he delivered their 8 lb 14 oz baby son Elliot at their home in Bingham without medical help in 2019.

The dad-of-two, who has worked in the funeral business for 30 years, said it was special "bringing life into the world" given it was the opposite of his usual day job.

He added: "It's certainly very different to my day job. It's the opposite to what I do really but I think being a funeral director actually helped with staying calm.

"My daily role involves me being calm and reassuring. It takes many years of experience.

“But helping deliver my own child is not something that I ever expected to have to do.

“To have done it twice is very special. I’ve been the first person in the world, for a brief moment, to have held them."

The couple's latest drama came after they tried to make it to Nottingham's Queen's Medical Centre when Natalie's waters broke at around 10 P.M.

But they faced diversions and roadworks which meant Dominic was left with no choice but to pull over at around 10.45 P.M. before Alice arrived 15 minutes later.

Several workmen and an RAC recovery driver came to the aid of the pair while Dominic delivered his own child in the back of the vehicle.

He explained: "It was Monday evening, and we were at home. Nat was sat on the sofa and started having a few twinges. Jokingly I said: ‘Are you sure this time?’

“About 10 P.M. in the evening, Natalie comes in and tells me that her waters have gone so I put everything in the campervan as it was at the end of the drive.

“We set off to hospital but a road was closed and we were diverted as a lorry in front of me went along at what felt like 10mph.

“We go onto the A60 and that was coned off. We stopped and I was talking to the workmen. She opened the door and she said the baby was coming now.

“I thought 'oh no, here we go again'. It was just a case of keep calm and carry on.

“An RAC truck pulled up and put his warning lights on to make sure we could be seen while the workmen were calling the ambulance team.

"But there wasn't enough time. The delivery was smooth and it was just a case of keeping Natalie and the baby as warm as possible.

"I upped the difficulty by doing it in the middle of the A60. I won't be doing it again though, this is the last one.

"The staff at the hospital jokingly asked if I wanted a job as a midwife - but I said I think delivering two is more than enough."

Dominic had helped Natalie give birth to their first child Ethan, now two, at home while a 999 operator talked him through what to do.

Dominic, who works for A.W Lymn in Bingham, added: “With Elliot, Nat started having little twinges about 7/8 in the morning.

“I rang the hospital and they knew we were coming. I put all the stuff in the car and came back inside.

“As we got to the doorstep, she said this is happening now. I rang an ambulance and explained the situation.

"It happened very quickly. The gentleman at the ambulance control center talked me through what to do.

“Knowing the ambulance was on the way was good. He arrived at 10:50 A.M and two minutes later the crew arrived.

“I was a little bit in shock and I never dreamed I'd have to do it again."

Teaching assistant Natalie added: "It will be such a nice story to tell the children when they grow up, it's unique but definitely not what we planned.

"He certainly upped the difficulty this time. We were in the dark, in the cold outside, both trying not to panic and there was just nowhere to go.

"But sometimes needs must, and it was four blokes and an RAC man, and you just have to get on with what you have got to do."

Women who undergo IVF at greater risk of these disorders

A build-up of dust has meant InSight’s solar panels are gradually losing power and it is anticipated to end science...

“He knows when he sees me coming with the shopping bags that we are going out and gets excited."