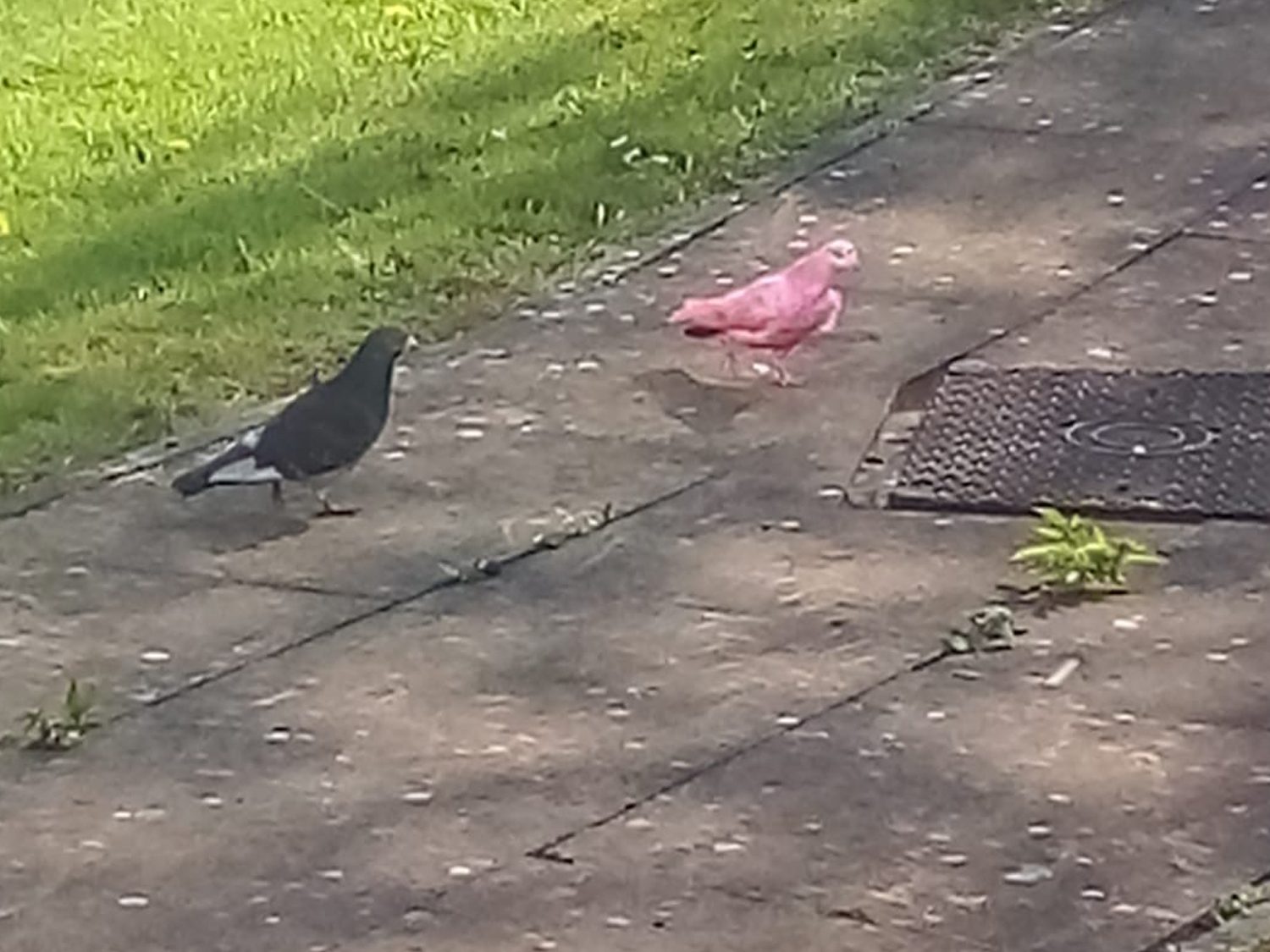 A mother said she was “shocked” when she looked out of the window to see what she believes is one of the world's rarest birds – a bright pink pigeon.

Kelly Lunney, 37, was at her mother’s flat in Nelson, Lancs, last Thursday when she happened to notice the fluorescent fowl land in the communal garden.

She believes it could be a Nesoenas Mayeri pink pigeon, which is native to Mauritius,. although some sceptics believe pranksters could have dyed it.

There are only around 500 of the birds left in the world, and traditionally they have a peachy-coloured breast and back, a rust-coloured tail and a dark pink beak.

The bird was part of a flock that had come down to peck at the soil, and when Kelly noticed it, she was left in a state of bewilderment.

Fearing that she was “seeing things”, Kelly then roused her mum and asked her to confirm if what she had spotted was accurate.

And after she corroborated the sighting, Kelly took her phone out and began to capture footage of the incredible bird in flight.

Kelly said: “I thought I was seeing things at first – or it was just something weird.

“But then, I got my mum up off her bed as well, just to make sure.

“It’s shocking more than anything to see a pink pigeon, but it’s something that you can tell your grandchildren.”

Kelly, a homemaker from Burnley, Lancs., said she had gone to her mum’s flat on the morning of May 5, before looking out the window and spotting the pink pigeon.

She said: “It was Thursday when I first saw it, and it stayed around for a couple of hours.

“I then later saw it come back around seven or eight o’clock in the night. And it’s been back every day since that time when it first came.”

Kelly said she didn’t hesitate to get some snaps of the bird once her mum had confirmed that she wasn’t hallucinating.

She said: “As soon as my mum had looked at it as well, I got a couple of pictures of it, and I thought I’d Google it, because I’d never seen one before.

“My mum had also never seen one during the whole time she’d been alive."

Kelly said people had been quick to suggest that the pigeon may have fallen into a vat of neon paint, but she believes its plumage is not synthetic - but genuine.

She said: “A few people have asked me if it’s been dipped in paint, but it’s got pink feet – and normally, they’re like a white, grey colour.

“And when it picks up its wings, it’s got white lines underneath it, and it looks identical on both sides when it’s flying.

“Other people in the communal garden have seen it – and there’s a man down the bottom who actually feeds them, so I’m sure he would have seen it, too."

She added: “I think everyone’s been really shocked by it.”

Sightings of pink pigeons are rare in the UK, although the birds have been found in 2012 in London and in Bristol in 2015.

Some of the unusual birds only have a pink tinge on the tips of their wings, whereas others, like the one Kelly spotted, are far more brightly coloured.

Bird experts have several theories about the unnatural looking warblers, including that they're part of an endangered species called Nesoenas mayeri, native to Mauritius.

Others have claimed that the birds have consumed certain chemical substances or could have collided with a fluorescence liquid in the wild.

However, many believe the more likely scenario is that people are responsible for dyeing the birds pink and then releasing them, sometimes by accident.

In 2015, a pigeon fancier, Sher Singh, 39, from Bristol, came forward to admit that he had coated several birds in fabric dye to disguise them from predatory falcons.