An adorable three-year-old girl is delighting seniors by dressing up as a "mini-queen" and paying "royal" visits to care homes to celebrate Queen Elizabeth II's Jubilee year.

Little Isla Bates has undertaken a number of “royal engagements” across the north of England, where she has been treading the red carpet and perfecting her regal wave.

The tiny queen enlisted the help of her mom, Alex Fairhurst, to perfect her royal outfit, which includes a salmon pink coat and hat, with a pearl neckless and matching shoes.

For full effect, she has even donned a wig with greying hair to complete her look.

And as part of the Queen’s Green Canopy initiative, Isla has also been helping to plant trees at the nursing homes, which are dotted around Stockport, Grtr Manchester.

Alex, from Wigan, Lancs., said her daughter had “thoroughly enjoyed” her time visiting the elderly residents, adding she felt “privileged” to take part in the jubilee celebrations.

She said: “Isla thoroughly enjoyed her time at Cheadle Manor and Bramhall Manor, and especially loved dressing up as The Queen.

“It is a real privilege for Isla to be involved in the Platinum Jubilee and by planting the tree she is playing her part in improving the environment and leaving a lasting legacy in Stockport.”

The Queen’s Green Canopy initiative, which was introduced for her jubilee year, is designed to enhance the environment and create a legacy in honor of her leadership of the nation.

And at Bramhall Manor, three residents - John Rankin, Richard Dixon and Eric Norcross - helped Isla plant a tree, which was followed by a traditional tea party.

Rowena Bolton, home manager at Cheadle Manor, said: “The residents were thrilled to have a mini-Queen for the day and enjoyed the celebrations.

“There were smiles all round!”

Isla’s incredible part as the “mini queen” is one of many fun and quirky events that are being held up and down the country during Elizabeth’s Platinum Jubilee year.

The Queen first came to the throne on February 6, 1952, and has served the United Kingdom, the Realms and the Commonwealth for the last 70 years.

On Saturday, she attended a jubilee celebration at the Royal Windsor Horse Show, which featured stars including Helen Mirren, Tom Cruise and Damian Lewis.

And during the extravaganza, she watched performances by the Household Calvary and saw acts from comedian Omid Djalili and singer Gregory Porter.

Despite her mobility issues, this was the 96-year-old queen’s second public appearance in three days, and she was greeted by a standing ovation when she entered the royal box.

She was absent from the opening of parliament, which took place last week, for the first time since 1963, with Prince Charles taking her place.

Study: Children spending too much time on the sofa

Vogue Magazine fighting this 200-year-old pub over its name 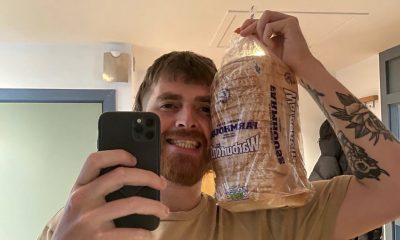