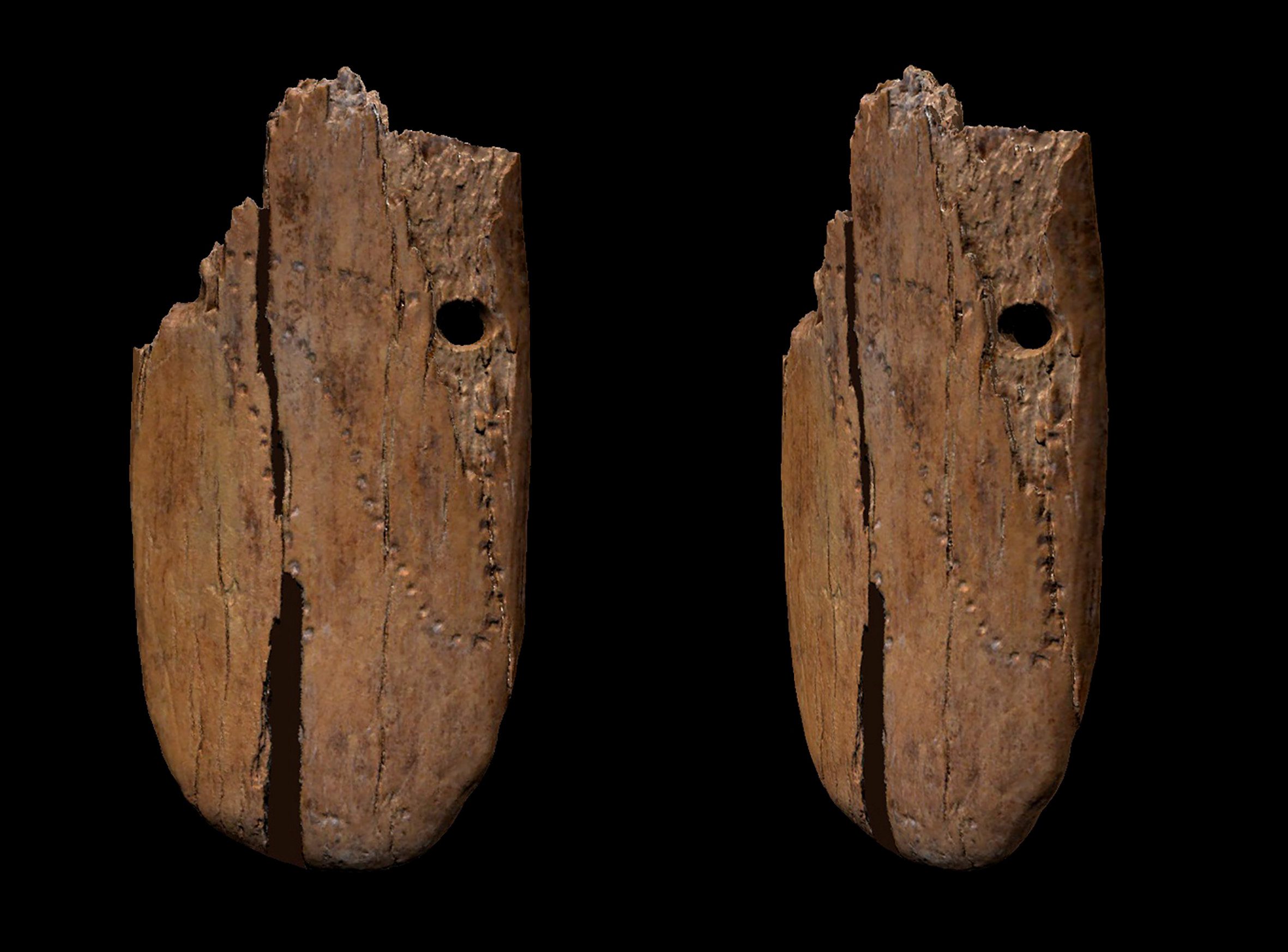 The Stajnia pendant is decorated with a pattern of at least 50 punctures, creating an irregular looping curve (Antonino Vazzana via SWNS)

The world's oldest bling dating back 41,500 years has been unearthed in a cave in Poland.

The ivory pendant made from a mammoth tusk is believed to have been lost during a hunting expedition.

It was found along with a bony spike, or awl, used to drill at least 50 punctures - possibly representing 'kill scores'.

On the other hand it could have been a primitive timing device - to work out sunrise and sunset.

"This piece of jewelry shows the great creativity and extraordinary manual skills of members of the group of Homo sapiens that occupied the site," said co-author Dr. Wioletta Nowaczewska, of the University of Wrocław.

"The thickness of the plate is about an 8th of an inch - showing an astonishing precision on carving the punctures and the two holes for wearing it."

They created an "irregular looping curve" - providing the earliest evidence of decorating jewelry in Eurasia.

The pendant described in the journal Scientific Reports was unearthed in Stajnia Cave in Southern Poland's Czestochowa Upland.

It was the forerunner of human body augmentations like nose, ear and mouth piercings we see today.

"Determining the exact age of this jewelry was fundamental for its cultural attribution, and we are thrilled with the result," said lead author professor Sahra Talamo, of the University of Bologna.

Homo sapiens began dispersing in Central and Western Europe around 42,000 years ago.

They started to manipulate mammoth tusks for the production of pendants and carved statuettes - at times decorated with geometric motifs.

In addition to lines, crosses and hashtags a new type of design - the alignment of punctuations - appeared in some ornaments.

They have been found in figurines in south-western France and Swabian Jura in Germany.

Analysis of the pendant and awl was carried out through digital micro-tomographic scans.

"This work demonstrates using the most recent advances in the radiocarbon method enables us to minimize the amount of sampling and achieve highly precise dates with a very small error range," Talamo said.

"If we want to seriously solve the debate on when mobiliary art emerged in Palaeolithic groups, we need to radiocarbon date these ornaments, especially those found during past fieldwork or in complex stratigraphic sequences."

The pendant was unearthed in 2010 among animal bones and stone tools.

Its disposal probably occurred during a hunting expedition into the Krakow-Częstochowa Upland where it broke and was left behind.

Co-author professor Stefano Benazzi, also from Bologna., said: "Through 3D modeling techniques, the finds were virtually reconstructed and the pendant appropriately restored, allowing detailed measurements and supporting the description of the decorations."

Another theory is the markings represented an 'analemma' - the figure-8 you get when you mark the position of the Sun at the same time each day for one year.

Over one lunar month it will trace out a curve as the Moon's actual position wanders due to its tilted and elliptical orbit.

The archaeological site is one of the most important in Europe - yielding remains of Neanderthals and Homo sapiens.

"If the Stajnia pendant’s looping curve indicates a lunar analemma or kill scores will remain an open question," said co-author professor Adam Nadachowski , of the Polish Academy of Sciences.

"However, it is fascinating that similar decorations appeared independently across Europe."

Poland is often excluded in broad-scale scenarios on the earliest expansion of Homo sapiens - suggesting it remained deserted for several millennia after the demise of Neanderthals.

"The ages of the ivory pendant and the bone awl found at Stajnia Cave finally demonstrate the dispersal of Homo sapiens in Poland took place as early as in Central and Western Europe," said co-author Dr. Andrea Picin, of the Max Planck Institute for Evolutionary Anthropology, Leipzig.

"This remarkable result will change the perspective on how adaptable these early groups were."

Further detailed analyses on the ivory assemblages of Stajnia Cave and other sites in Poland are currently underway.

They promise to yield more insights into the strategies of production of personal ornaments in Central-Eastern Europe.

Man uses his mouth to paint, make tea and even cross-stitch